There has been a lot of media coverage about older Americans not being prepared for retirement. In fact, LIMRA research indicates that over half of pre-retirees (55-70 non-retired) today have less than $100,000 in financial assets. With so little in financial assets, our industry will be challenged to help these individuals make realistic retirement plans unless they spend the next couple of years saving through catch-up contributions.

The question is, how do we prevent future pre-retirees from being in the same boat?

LIMRA’s consumer research shows that four in ten U.S. workers are saving less than three percent towards retirement, and 80 percent of U.S. workers acknowledge that they need to save more to be on track for retirement. Clearly, as a society we need to find a way to encourage American workers to save and plan for retirement, starting at the beginning of their career. 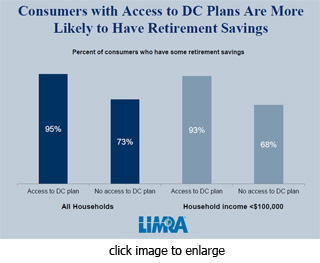 There is good news. Recent LIMRA research revealed that employees who have access to a defined contribution (DC) plan through their employer are more likely to have saved for retirement (chart).

Most recent Bureau of Labor Statistics (BLS) data indicate that 59 percent of American private-sector workers have access to a DC plan, which is 16 percent higher than in 2003. Hopefully with more people having access to DC plans, younger Americans will have more saved toward retirement than those on the cusp of retirement today.