For years researchers suggested that as the Baby Boom generation begins to retire, they will create a large statistical bump, which will subside as members of the generation pass.

That theory is not proving to be true.

According to U.S. Census Bureau, the number of Americans reaching 65 years old each year will continue to grow beyond the Boomer generation. In fact, even when the last baby boomer reaches 65, there is no noticeable decline in the numbers. In 2013, 3.4 million individuals are projected to reach age 65; by 2023, 4.1 million Americans will reach 65; and 4.2 million by 2050. Immediately following the boomers are 78.4 million Generation X and Gen Y individuals (age 30-48). After them, 11-29 year olds represent another 82 million individuals who will be heading toward retirement in the next 35-55 years. (See chart, also below) 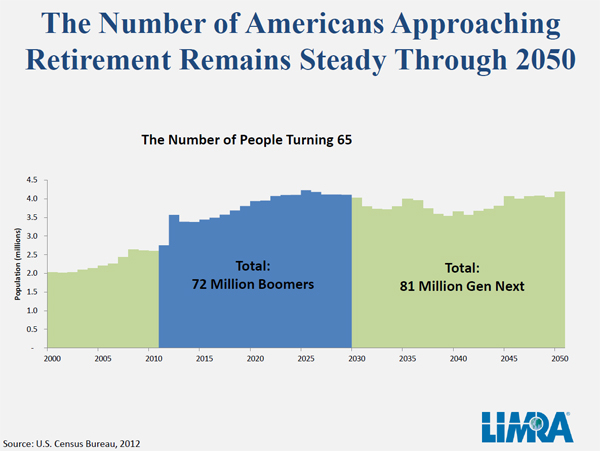 This means that financial services firms should be looking at the retirement market not just for the immediate opportunity offered by Boomers but preparing for the possibility of long-term, sustained growth as Gen X and Y consumers prepare for retirement. LIMRA estimates that there will be nearly $22 trillion in investible assets from Americans age 55 and older available for retirement income solutions by 2020. Younger generations — who probably won’t have a pension and likely to be solely responsible for their retirement savings — are likely to have more by the time they reach age 55.

The retirement boom is here to stay — the trick is whether our industry can help future retirees keep from going bust.