While it’s important to plan for retirement, it’s difficult to predict a retirement date. 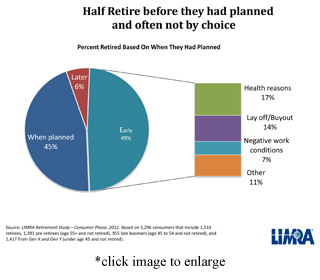 According to LIMRA Retirement Research, for nearly half (49 percent) of all retirees, the date of retirement was dictated by factors out of their control. Health issues, job loss (due to layoff or employer buyout, and negative work conditions were cited most as the reasons behind retirees leaving the workforce earlier than planned. In fact, only 45 percent said they retired when they had planned. (See graph)

Retiring earlier than planned can have significant long-term consequences. When someone is forced to retire early it could seriously affect their standard of living in retirement. In addition to the loss of a regular paycheck, early retirement also affects employer-supplied benefits, such as health coverage and retirement contributions.

In many cases, retirement is forced on people who are actually pre-retirees. Several years younger than a typical retiree, the pre-retiree may not be eligible for Social Security benefits or a reverse mortgage. They need to make financial decisions immediately that they would have, ideally, made later.

Advisors who recommend to their clients steady systematic savings throughout one’s career can help them mitigate some of the risk. Because no one can predict retirement dates with perfect accuracy, early planning and preparation makes it less painful when someone is forced to leave the workforce earlier than they’d planned.