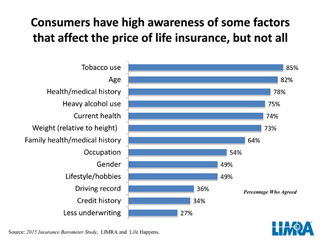 During this Fourth of July holiday weekend AAA the automotive and travel association estimates that 41.9 million people will travel at least 50 miles from home with 85 percent of them going by car.

The Federal Highway Administration recently announced that Americans are logging in record numbers of driving miles.  For the first four months of 2015, Americans drove 987.8 billion miles, breaking the previous record of 965.5 billion miles, set in 2007.  More driving on our roads usually leads to an increase of bad driving, too.

As part of the 2015 Insurance Barometer consumers were asked to identify the factors that affect the price of a life insurance policy.  Awareness was high for health and lifestyle factors such as tobacco use, medical history and heavy alcohol use.  By contrast, consumers have far less awareness of the impact their credit history and driving records have on what they will pay for life insurance.

Also noteworthy, only 27 percent of consumers understood that less underwriting could affect the price of a policy.  This lack of awareness is reflected in another finding from the Barometer study that shows only 7 percent believe life insurance costs more online.  For the many online policies that use simplified underwriting, that is the case.  Yet, 77 percent believe life insurance costs the same, whether or not it’s bought online.