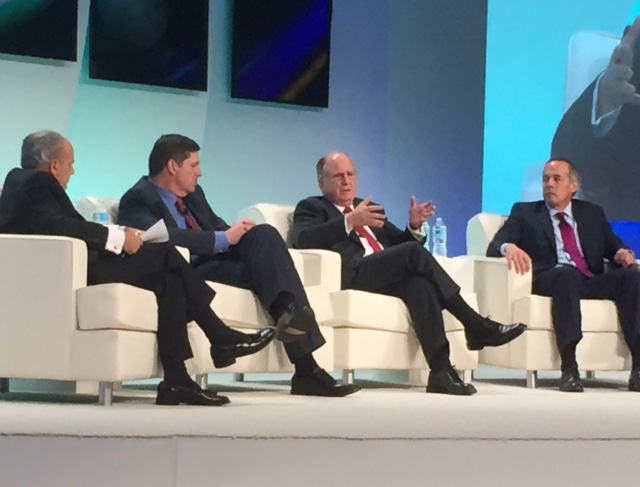 (l-r) Moderator Robert A. Kerzner from LIMRA,
Roger W. Crandall from MassMutual, Donald
A. Guloien from Manulife, and Walter White
from Allianz Life.

Three life insurance CEOs joined LIMRA President and CEO Robert Kerzner for a candid discussion, sharing their prespective and insights about the future of the industry at the the LIMRA 2015 Annual Conference on Monday in Boston.

All three panelists acknowledged the Department of Labor’s fiduciary regulations were the most formidable threat to the life insurance industry.  Crandall said they will constitute “the biggest change to the industry since ERISA in 1974.” White said that while it’s easy to see the downside for the industry and for customers’ ability to receive low-cost advice, he’s hopeful the end result will be a newfound importance placed on the value of financial advice. “We’ll get through it,” added Crandall.

Guloien, who has managed a slew of mergers and acquisitions at the helm of Manulife, said his goal has always been to get more people covered by life insurance and to find “new ways of distributing our great products all over the world.”

A predominant theme among the panel was change and how the industry is responding to it. Walter White acknowledged that “a confluence of forces is coming together and we have to acknowledge the new reality.”

All three discussed how technology is changing everything from product development to consumer engagement  and distribution.  White shared how his company was testing new product designs directly with consumers to build better products.  Guloien discussed the success of John Hancock’s partnership with Vitality, highlighting how it has “redefined our relationship with the consumer.”  Crandall, who cited LIMRA research that life insurance ownership is at a 50-year  low,  said “We have a moral obligation” to try new things and make investments for the future to reach more Americans.

Robo-advisors, which LIMRA estimates will manage approximately $2 trillion in assets by the end of the decade, were another hot topic, with Guloien calling them “overhyped” and dismissing the idea they could replace traditional advisors. He said they will become part of the landscape but won’t fundamentally alter it. All three panelists agreed that robo-advisors are but one of the industry changes that they will have to get ahead of or risk falling behind.

White said the industry “has a sense of purpose,” and that sense will sustain the financial services industry through whatever the future may throw at it.

The LIMRA 2015 Annual Conference has the theme: “Pivot Point: Striking a Path for Success.” It concludes today.