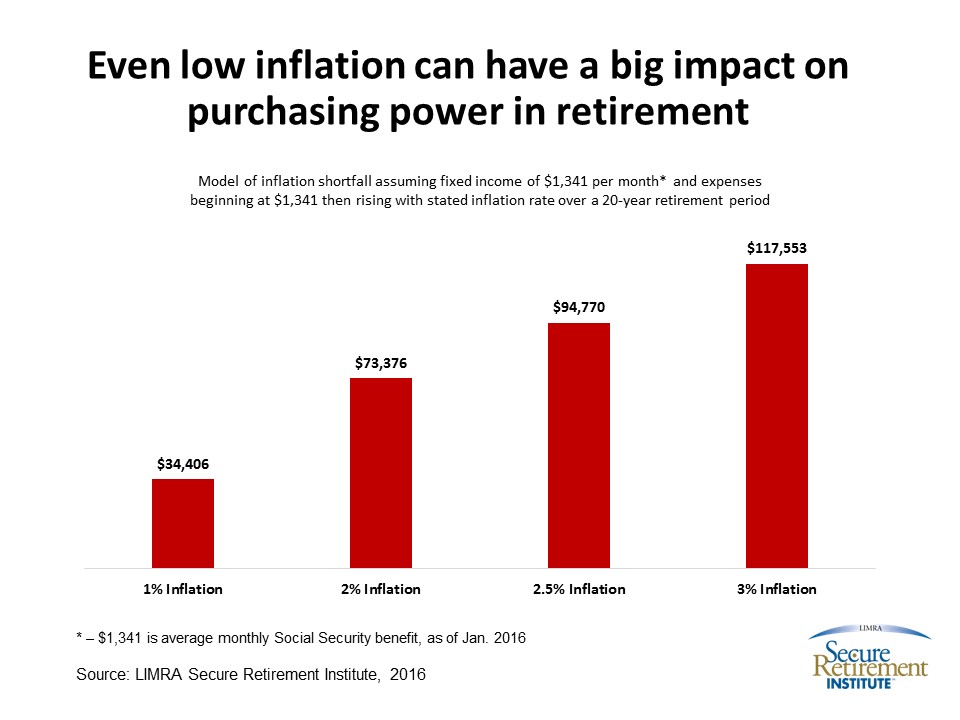 and pre-retirees share their concerns about risks in retirement, inflation often shows up near the top of the list.  Even with inflation at its current level of just under 1 percent (year over year, Mar. 2016, Bureau of Labor Statistics) it remains a threat to a secure retirement.

Retirees also spend relatively more than other groups on housing where costs have increased slightly higher than overall inflation.

Even a low rate of inflation can significantly erode purchasing power in the long run.  LIMRA Secure Retirement Institute modeled the effect 2 percent annual inflation could have on a 20-year retirement.  Using a fixed monthly income of $1,341 (the average monthly benefit paid by Social Security) and assuming that monthly expenses increase from $1,341 to $1,993 at the end of the 20-year period, the inflationary impact results in a shortfall of $73,376.  When the calculation is run at 3 percent inflation, the shortfall jumps to more than $117,000.  (chart)

Illustrations like this can help pre-retirees and retirees better understand the importance of retirement products that make adjustments for inflation.  Social Security’s Cost-of-Living Adjustment (COLA) was designed to provide an annual increase in benefits, but does not always do so.  The COLA is based on the Consumer Price Index (CPI) which measures the spending of all Americans. In the course of a year, if spending increases for retirees but not for all Americans and the result is a level CPI, then no COLA will be paid to retirees who receive Social Security benefits.   For example, there were no inflationary adjustments to Social Security benefits in 2010, 2011 and 2016.

By working with a financial professional, pre-retirees and retirees can examine the impact of inflation – and all the other risks they may face in retirement – and develop a formal written plan that mitigates the risks and helps them achieve their financial goals.