A recent research brief by LIMRA 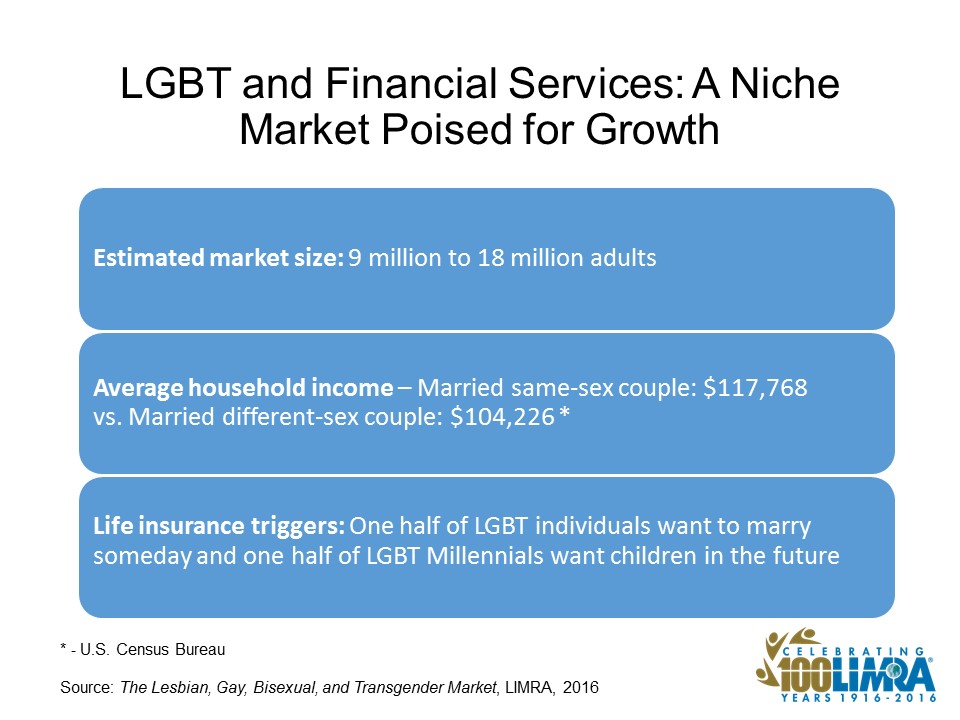 explores the feasibility of the LGBT population as a market for financial products.

Gauging market potential presents a challenge because the only way to accurately estimate its size is for individuals to identify themselves as LGBT.  Because many may be reluctant to identify as LGBT, market estimates range from as low as 9 million to as high as 18 million adults age 18 and older.

From a gender and ethnicity perspective the LGBT population is very similar to the general U.S. population.  One difference, they tend to be younger than the general population as younger adults are more likely to self-identify as LGBT.

U.S. Census Bureau data on average household income shows married same-sex couples at $117,768 compared with married different-sex couples at $104,226. Recent Supreme Court rulings on same-sex marriage —legal in all 50 states and recognized for federal benefits —will have financial implications for same-sex married couples. LGBT consumer surveys found more than 7 in 10 do not fully understand how these rulings would affect their personal finances and their workplace benefits.

While LGBT may be a niche market today, it may represent a viable opportunity for companies and advisors in the near future. (Chart) As social acceptance increases more individuals are likely to self-identify as LGBT which will grow the population.

In separate studies, half of unmarried LGBT individuals said they would like to get married someday. Currently, 16 percent of LGBT couples have children and half of Millennial LGBTs said they want to have children in the future. Of course, LIMRA research has consistently shown marriage, children and buying a home have long been key triggers to shop for life insurance.

The financial needs of the LGBT market are similar to the general population in many ways and different in others. When approaching any new business, companies and advisors need to first understand the market, its nuances and how they can effectively serve it.

The LIMRA brief suggests several ways financial professionals can establish themselves with this market such as, affiliations with LGBT-focused organizations, positioning advisors as experts in LGBT financial issues and webinars to address financial needs of all consumers with specific information for LGBT consumers.

Serving a niche market is often an effective way for financial professionals to expand their business. The LGBT population offers a natural niche opportunity with a young, fairly affluent, and growing market that needs help with understanding their finances.