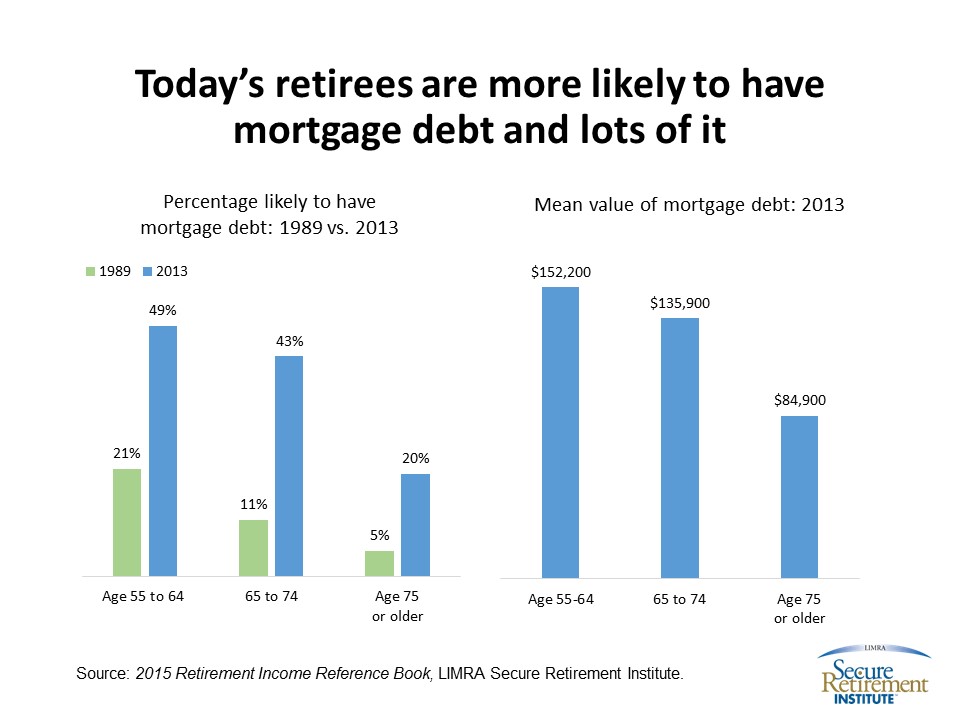 owning a home is usually one of their largest assets. For an increasing number of retirees, a home also represents their biggest debt.

Home ownership is widespread among retirees. Among those with $100,000 or more in assets, 9 out of 10 own a primary residence. For retirees with lower assets, 7 in 10 own a home.

Even retirees age 75 and older are carrying more debt burden. According to LIMRA Secure Retirement Institute research, 2.7 million households, or 20 percent of this group had mortgage debt in 2013, compared with 1989 when only 5 percent carried a mortgage.

Institute research finds people carry debt into retirement for many reasons, such as using their home’s equity to fund health care, education, consolidating other loans and other expenses. Even with low interest rates, mortgage debt represents a cash outflow that can eat away at retirement income.

In the best circumstances, a couple’s collective retirement income will allow them to stay on top of their living expenses and debts. Institute research has shown that very few plan for the inevitability of meeting all these obligations when one of them dies. For this reason, an advisor’s best counsel is to encourage both spouses to be actively involved in their financial decisions as the surviving spouse typically lives for an extended period of time.

As the number of retirees with mortgage debt grows, there is an opportunity for advisors and carriers to help couples develop strategies to mitigate that risk in retirement.