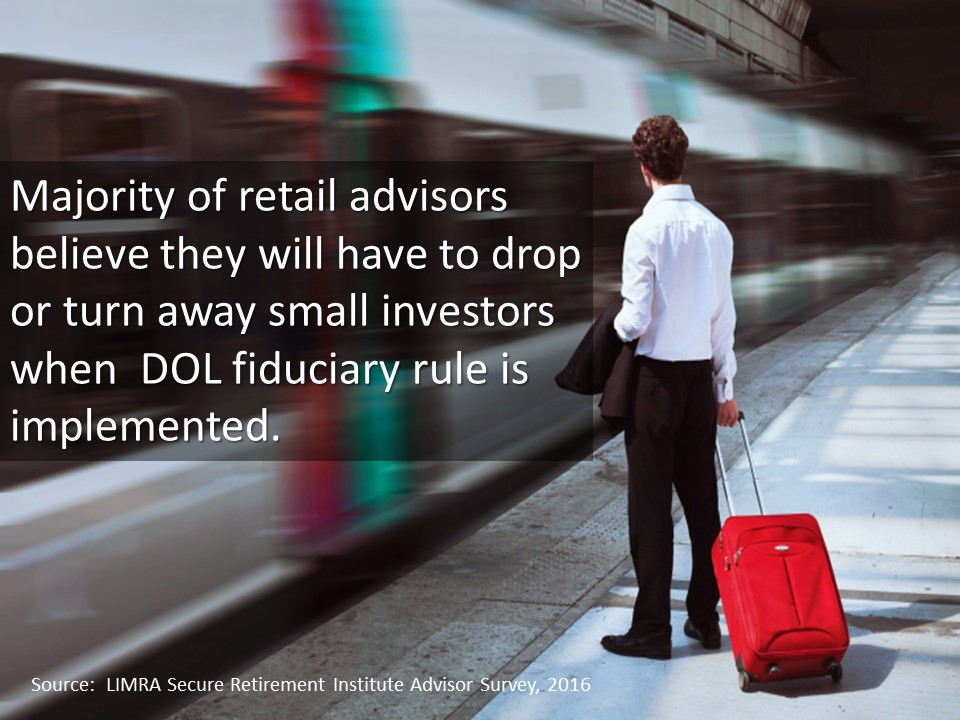 survey finds that 55 percent of retail advisors believe they will have to drop or turn away small investors and half will stop handling small rollover business when the Department of Labor’s proposed fiduciary rule is implemented.

According to prior LIMRA Secure Retirement Institute research, 9 in 10 U.S. middle market households (assets between $100k-$249K) have assets in a defined contribution plan or an IRA and the majority of them expect to rely on those assets to fund their retirement.  How will the proposed DOL fiduciary rule impact middle market families’ ability to get help managing their assets in retirement?

Advisors believe it will have a significant impact. According to the survey, nearly half of advisors say the rule will discourage them from handling small rollover business and will require the advisors to spend more time to complete a rollover.  However, 8 in 10 advisors seem to believe the volume of rollover business will not be affected. This suggests that advisors likely will focus their attention on larger rollover opportunities rather than help consumers with smaller account balances, who face the most financial risks in retirement. Consistently, Institute research has found that consumers who work with an advisor to plan for retirement have better outcomes. The survey indicates that fewer middle market Americans will have access to professional advice.

The proposed rule will likely influence what products advisors will sell in the future. Once the rule is implemented, 45 percent of advisors say they will be more sensitive to product fees, and more than a third (37 percent) say they will use passively-managed funds more often. The study also revealed more than 1 in 4 advisors expect to sell fewer annuities, and 1 in 6 say they would focus on selling annuities with non-qualified assets when the rule goes into effect.

To learn more about the DOL Fiduciary Rule, visit Fiduciary News and Developments.