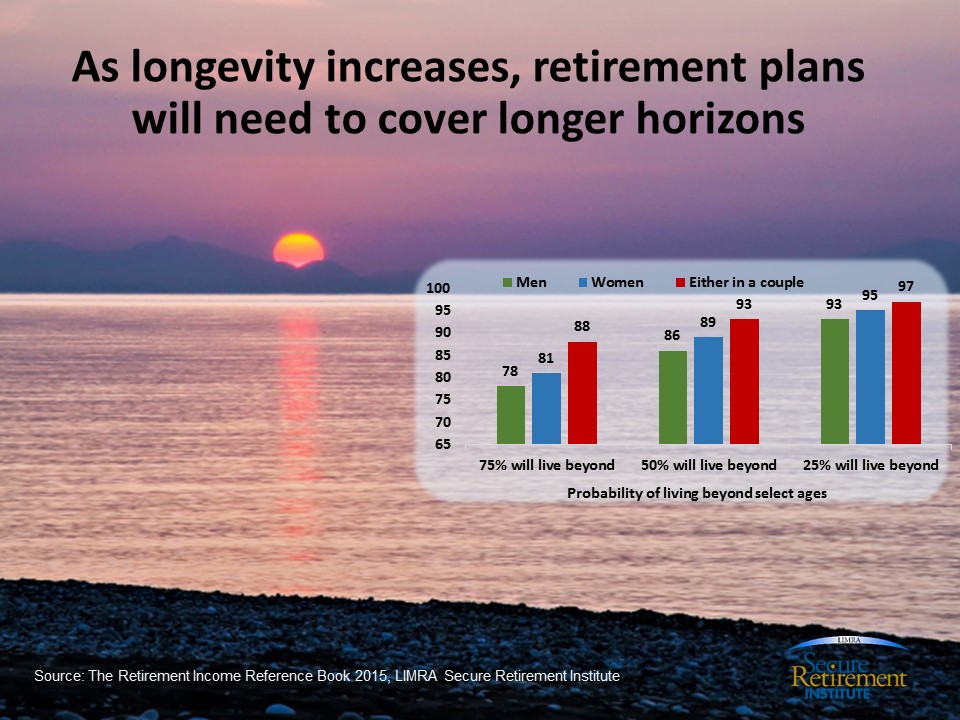 As longevity improves for Americans, LIMRA Secure Retirement Institute findings suggest financial plans should be calculated to cover a person until their mid-90’s, at minimum.

That’s a long way from 1955 when the U.S. government statistics on average life expectancy were close to age 70.

For today’s retirement plan, it’s essential to consider how long a person may live in their later years.  Government figures on average life expectancy (currently at 78.8 years) cover all births and deaths and are not accurate guidelines to calculate finances in retirement.

LIMRA Secure Retirement Institute research shows having enough money to last their lifetimes is the top retirement goal for 71 percent of consumers age 50-75. Advisors and companies can illustrate longevity to help consumers understand they will need to fund a longer retirement than imagined.

Financial independence requires both managing savings and sources of income in retirement such as Social Security.  In 2014, nearly three-fourths of Americans claimed Social Security before they reached full retirement age. With longevity data suggesting that a person with average health could live into their 90s, claiming Social Security early (instead of at age 66 or later) would lock them into smaller payouts for potentially 30 years or more.

When consumers clearly understand the effects of longevity risk, they can make better decisions to improving their outcomes and their security in retirement.