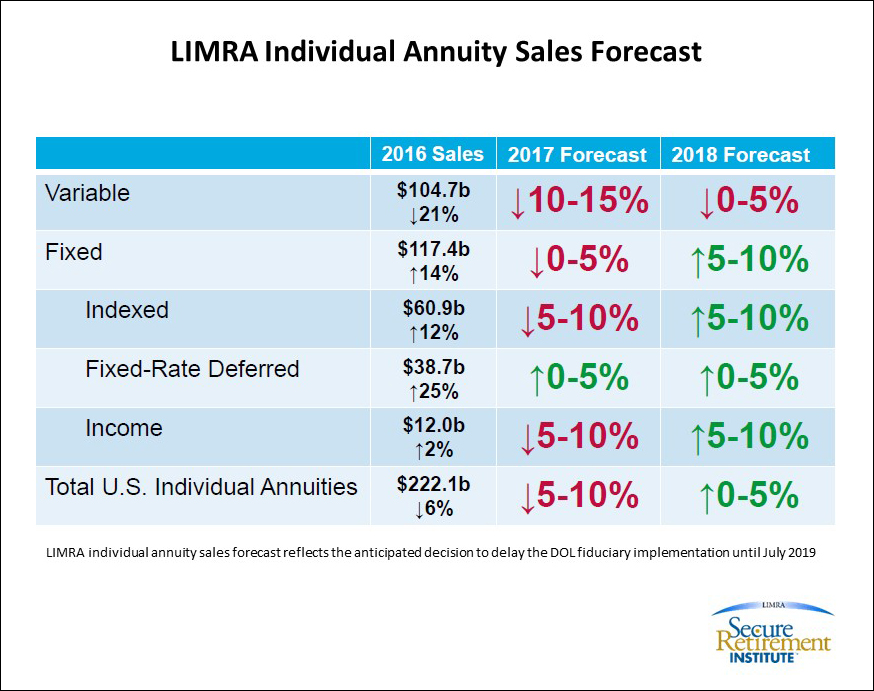 has revised its annuity sales forecast for 2018, following a delay in the Department of Labor fiduciary rule (DOL rule).

Overall annuity sales experienced declines in 2017, which were predicted to continue in 2018. Today, LIMRA Secure Retirement Institute predicts a five percent increase of overall annuity sales in U.S. in 2018. Variable annuity (VA) sales are still expected to decline in 2018 (0-5 percent), but the decline is less than originally thought (10-15 percent), compared with sales in 2017. The Institute expects fixed annuity sales to increase 5-10 percent in 2018, an improvement over the expected 0-5 percent decline expected in 2017.

Indexed Annuities to Drive Increase in Fixed Annuity Sales
LIMRA Secure Retirement Institute forecasts that sales of fixed annuities will increase across all product lines: indexed, fixed-rate deferred and income annuities. Because of the delay in the DOL rule, the Institute projects 2018 indexed annuity sales will bounce back from the decline seen early in 2017 to reach the near record levels ($60 billion+) of 2016. The rule would have had significantly disrupted the independent marketing organization (IMO) channel, which represents a large portion of the indexed annuity sales. With the DOL rule delayed, the Institute projects indexed annuity sales to rebound five to ten percent in 2018, compared with 2017 sales results.

Improvement in Variable Annuity Sales
Variable annuity sales have declined for the past five years, in part because companies have been carefully managing their VA sales volume. The decline of VA sales accelerated once DOL fiduciary rule was published in 2015. The Institute believes the delay in implementing the DOL rule, and thus the best interest contract requirements, will reduce some of the pressure on the VA market in 2018, and help improve sales. While there will be positive progress, the Institute still forecasts a decline in 2018 VA sales, albeit smaller than predicted when the rule was expected to go into effect on Jan. 1, 2018.