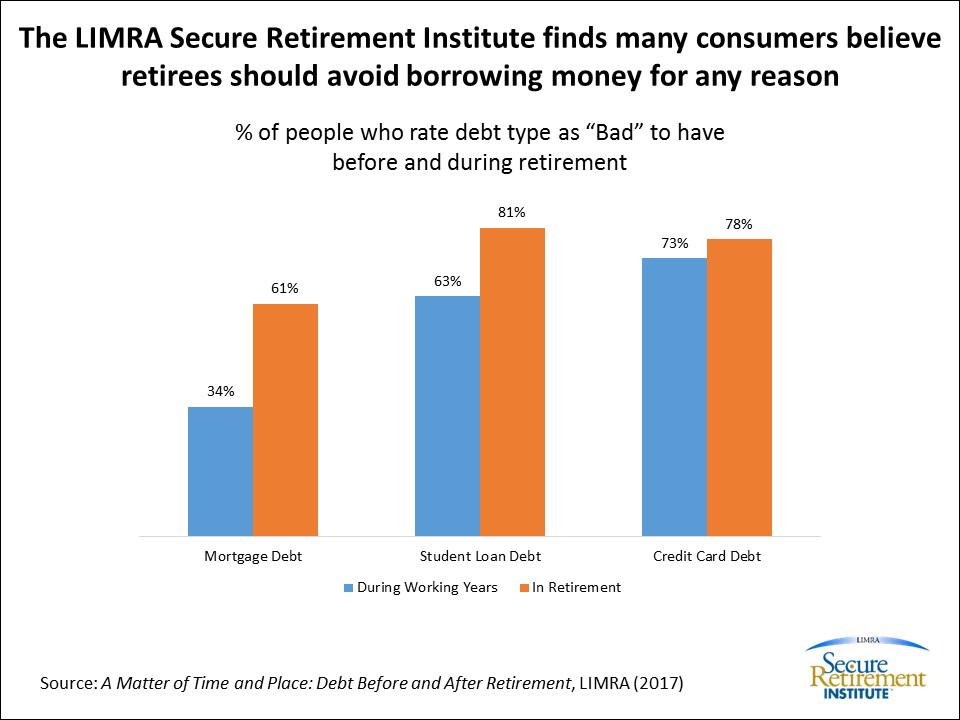 finds* consumers attitudes towards being in debt, even so called “good” debt, is negative during retirement. The Institute finds 67 percent of consumers believe retirees should avoid borrowing money for any reason.

Debt levels for those aged 65-80 increased 40 percent from 2003-2015, according to the New York Fed Consumer Credit Panel1. LIMRA Secure Retirement Institute finds retirees with debt are less confident than those who are debt-free. Seventy percent of retirees without debt are confident they will be able to live the lifestyle they want, while only 51 percent of retirees holding debt feel the same way.

Student loan debt balances and prevalence are growing among those 65 and older. According to Government Accountability Office (GAO) the number of federal student loan borrowers 65 or older rose by 385 percent between 2005 and 2015. The amount of debt held by Americans ages 65 and over increased from over $2 billion to nearly $22 billion2. Being in default of a federal student loan debt can result in a reduction of Social Security income used to repay the debt. As of 2015, the GAO observed 5 percent of borrowers 65 or older are facing this reality. The Institute finds student loan debt ranks as the least favorable debt to have in retirement, with 81 percent of consumers viewing student loans as “bad” debt.

The traditional goal of debt-free retirement is still widely prized. Poorly timed debt can compromise people’s financial security. Being in debt during retirement can increase both emotional and financial stress. If debt among older Americans continues to increase, strategies to help retirees manage that stress will become more important. This opens an opportunity for financial services companies to help consumers manage their debt.

Assistance could come in the form of consumer-targeted programs to map out short- and long-term debt repayment. These plans could give customers a better handle on the implications and timing of debt. Guidelines regarding how consumers should allocate income between savings versus debt servicing could help them more effectively deploy their money between financial priorities. Additionally, discussing the risks of indebtedness as well as the peace of mind that comes with being debt-free with customers could help put the costs of holding debt in perspective.

*Results based on a survey of 945 Americans fielded by Ipsos in July 2017.