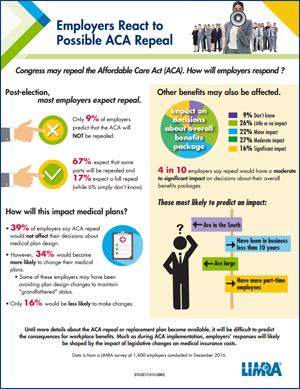 there has been a lot of uncertainty around what the new administration will do with the Affordable Care Act (ACA). Recent news suggests that attempts to repeal, replace, or modify the law may extend into next year. Recently, LIMRA surveyed employers to gauge their reactions to the possible upcoming changes. Survey data shows that only nine percent of employers believe it will not be changed and 16 percent except a full repeal. However, the majority of employers expect just some parts to be repealed.

Employers are split as to how they believe any type of repeal will affect their benefits packages. LIMRA data shows 43 percent of employers surveyed predict a repeal would have a moderate to significant impact on their future benefits decisions, while 48 percent think a repeal would have minor or no impact. The companies that expressed the most concern regarding the impact of an ACA repeal on their benefits have some similar characteristics. They tend to be larger companies, are more likely to be based in the South, have more part-time employees, and have been in business for less than 10 years.

Another concern is how a repeal can specifically impact medical benefits. Thirty-four percent of employers surveyed would likely change their medical plans if ACA is repealed. This could be due to the fact some of those employers have been avoiding making any plan changes to maintain their “grandfathered” status. On the flip side, 39 percent of employers stated an ACA repeal would not influence their decisions regarding medical plan designs.

These results were based on a survey of 1,400 U.S. employers conducted in December 2016. View the infographic.