LIMRA research finds that unlike in previous years, 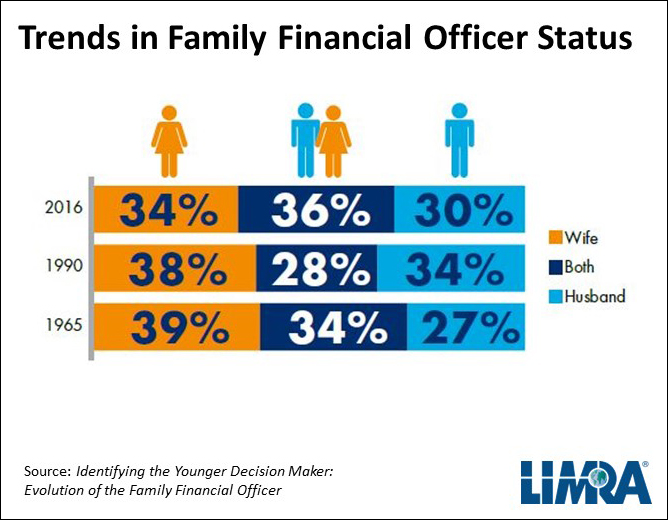 LIMRA first conducted the survey to find the family financial officer (FFO) in 1965 and then again in 1990. The FFO concept is based on identifying which person of the couple keeps the budget, tracks expenses and pays the bills. The person responsible for at least two of these three things is the FFO. The report shows that today’s couples are more likely to share the bill paying activities compared to the first study in 1965. This team effort went from just three percent to 42 percent today. Paying bills is also the most shared activity out of the three studied to find the FFO.

The most relevant socioeconomic changes since the 1965 and 1990 studies are the increased levels of educated women and their growing number in the work place. As a result, there is a larger share of couples where the wives out-earn their husbands.1 LIMRA research shows when the wife earns more, she is 38 percent more likely to be the FFO compared with all wives. In comparison, when the husband earns more the increase in the likelihood that he will be the FFO is much smaller, only 13 percent. When the incomes are similar, the wives tend to make the decisions or they share the decision-making responsibilities.

Understanding the FFO concept can be helpful to advisors when the household has one. LIMRA research finds that on average FFOs are 32 percent more likely to be extremely concerned about financial worries, including saving for retirement, and maintaining a current living standard should a wage earner become disabled or die. Additionally, 35 percent of FFOs will initiate financial discussions with their spouse/partner.

The report shows that 60 percent of couples do not strongly agree on their financial goals so it would be best to engage both spouses in the process even if there is a FFO. Prior LIMRA Secure Retirement Institute research examined the differences advisors face when dealing with male and female clients. For example, women tend to prefer more time to review information and discuss details with their advisors.2 Understanding these differences is important since the FFO research shows women make up a significant proportion of the young decision makers.

The FFO findings are based on 2016 survey of 1,043 households with a minimum annual income of $35,000. Respondents (aged 25-44) are married/partnered and have primary or shared decision-making responsibility about finances.

LIMRA members can read, Identifying the Younger Decision Maker: Evolution of the Family Financial Officer, to learn more about the topic.

2 The Road Ahead: Building the Female Client Relationship to Last, LIMRA (2017)