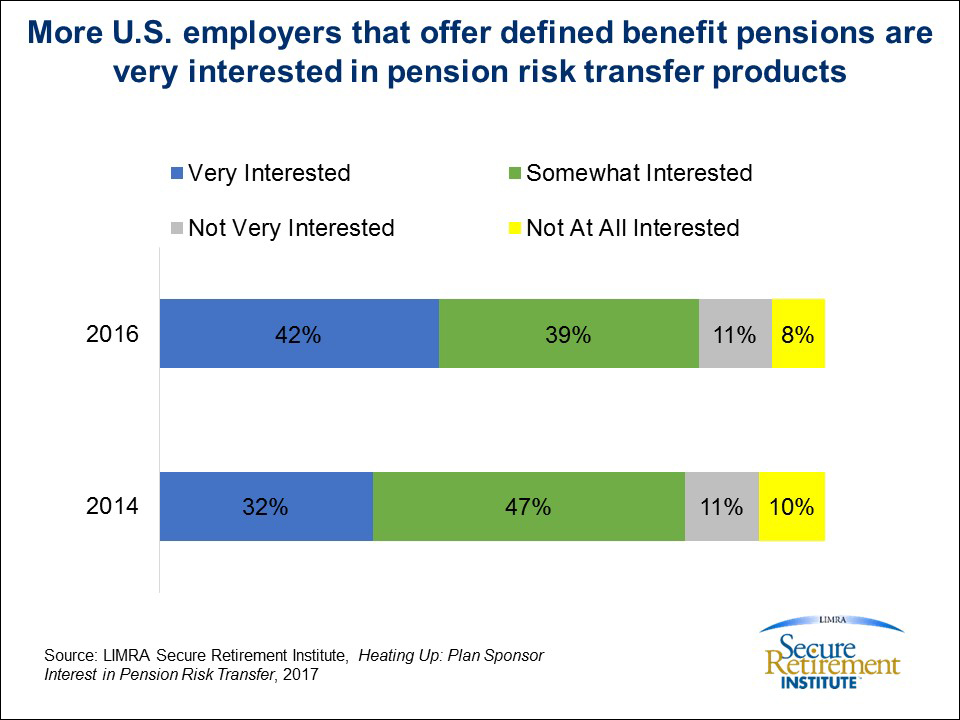 research study finds 8 in 10 employers with a traditional defined benefit pension plan are interested in pension risk transfer (PRT).  Since 2014, there has been a significant shift in plan sponsors interest in PRT. Today, 4 in 10 plan sponsors are very interested in PRT, a 10 percentage-point increase from the results of a 2014 Institute study of DB plan sponsors (chart).

A pension risk transfer allows an employer to transfer all or a portion of its pension liability to an insurer.  In doing so, an employer can remove the liability from its balance sheet and reduce the volatility of the plan’s funded status.

For those employers with DB plans who are not interested in PRT products, lack of knowledge is the top reason given (40 percent). Another quarter say that they address their pension risk through alternative means. The most common alternative to PRT is liability-driven investing (LDI), which seeks to limit the risk associated with market volatility by precisely matching assets to liabilities. While this strategy can lower investment risk, plan sponsors would still have to address other risks (for example mortality and fiduciary risks) and to pay Pension Benefit Guarantee Corporation (PBGC) premiums.

More than a quarter of employers with DB plans say low interest rates (which make it hard for employers to keep their plan adequately funded) dissuade them from considering PRT.  According to the study, 8 in 10 employers with a DB plan are less than 90 percent funded.

However, there are strategies a plan sponsor can use to improve their funded status, which can have significant impact on their bottom line.  For every unfunded dollar in a defined benefit plan, the employer is required to pay premium to the PBGC.  Over the last four years, variable PBGC premium has increased by over 300 percent, from 0.9 percent of unfunded liability in 2013, to 3.4 percent in 2017, and will rise to 4.1 percent in 20191. These increases impose a significant burden on plan sponsors with underfunded pension plans.

One method to improve funding status that has grown in popularity has been the borrow-to-fund method, in which an employer borrows the money to fund its DB plan.  In today’s low-interest environment, it could be possible for a company to obtain a loan for less than the current PBGC rate.

Institute research shows that the proportion of employers with frozen DB plans has increased seven percentage points from 2014 to 57 percent in 2016. This is a positive trend for the PRT market because freezing a plan is one of the first actions a plan sponsor must take on the path to a buy-out.  The Institute finds that employers with frozen DB plans are more interested in PRT products (84 percent), compared with those who haven’t frozen their plans (69 percent).

Study results are from a survey of 258 employers that sponsor a traditional defined benefit plan, conducted in October 2016. LIMRA members can access the full report by visiting: Heating Up: Plan Sponsor Interest in Pension Risk Transfer (2017).