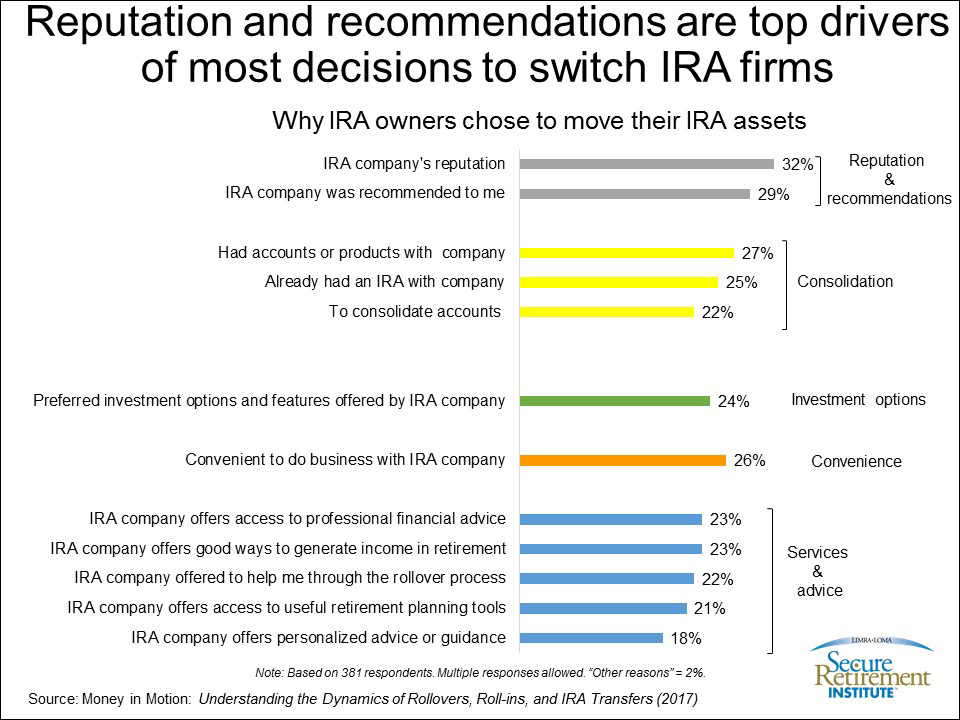 research finds that 9 percent of all IRA owners transferred their IRA assets to another firm within the last 24 months.

Most of these transfers were conducted by working Americans rather than those retired (82 percent vs. 18 percent). The study also found that younger IRA owners (ages 40-44) are more likely to move their assets than those ages 45 or older (29 percent vs. 11 percent). Men are nearly twice as likely as women to have done an IRA-to-IRA transaction within the past two years (63 percent vs. 37 percent, respectively).

Low-cost offerings are often not the priority when choosing an IRA firm.

The study found low-fee investments was not a top reason IRA owners considered when choosing a company, except among owners with higher household financial assets.

IRA companies that focus heavily on their low-cost offerings may be missing a substantial portion of the IRA-to-IRA transfer market. Advisor interaction, reputation, and branding dominate owner decisions among those moving their money to a company where they do not already have accounts or products. Depending on their customer segmentation strategies, companies that do not (or cannot) compete on fees alone should highlight their brand and overall customer services, and leverage their unique strengths.

Sixteen percent of IRA owners said they changed to another firm because the firm was recommended to them by a family member or friend. This was more pronounced with men.  Nearly a third of men (32 percent) said a recommendation played a role in their decision to move their assets compared to just a quarter of women (24 percent).

Thirteen percent of IRA owners are about as likely to say that reputation and recommendations drew them to a specific IRA company, as they are to say that they had an existing relationship with that company. Women were more likely to cite an existing relationship as one of the reasons they switched companies. A third of women said they has other accounts or products with the chosen company or had an IRA with the company, compared to less than a quarter of men.

As people age, they may be less apt to switch institutions because they may not be as motivated to pursue new relationships, with all the effort and risk that entails. Companies who have established programs to help IRA owners roll over their assets may attract more IRA owners. In fact, 10 percent of IRA owners ages 60 and older who switched firms said the company offered to help through every step of the transfer process.

Older IRA owners may also be persuaded to leave an existing relationship if the new company offers products or services that address issues that begin to take on greater importance, such as the need for retirement income planning and advice.

Who influences the decision?

Half of older IRA owners (ages 50-75) who transferred their retirement assets from one investment firm to another discussed the decision with an advisor. Six in ten said their financial advisor was the most influential in the decision to move their money.

Interestingly, 22 percent of these IRA owners said the decision to move their money was most influenced by the call center rep from their former IRA firm. This suggests that companies should ensure their representatives are well versed on the features offered by their company and are able to share these to clients when they call.

LIMRA members can read the full report by visiting: Money in Motion: Understanding the Dynamics of Rollovers, Roll-ins, and IRA Transfers (2017).