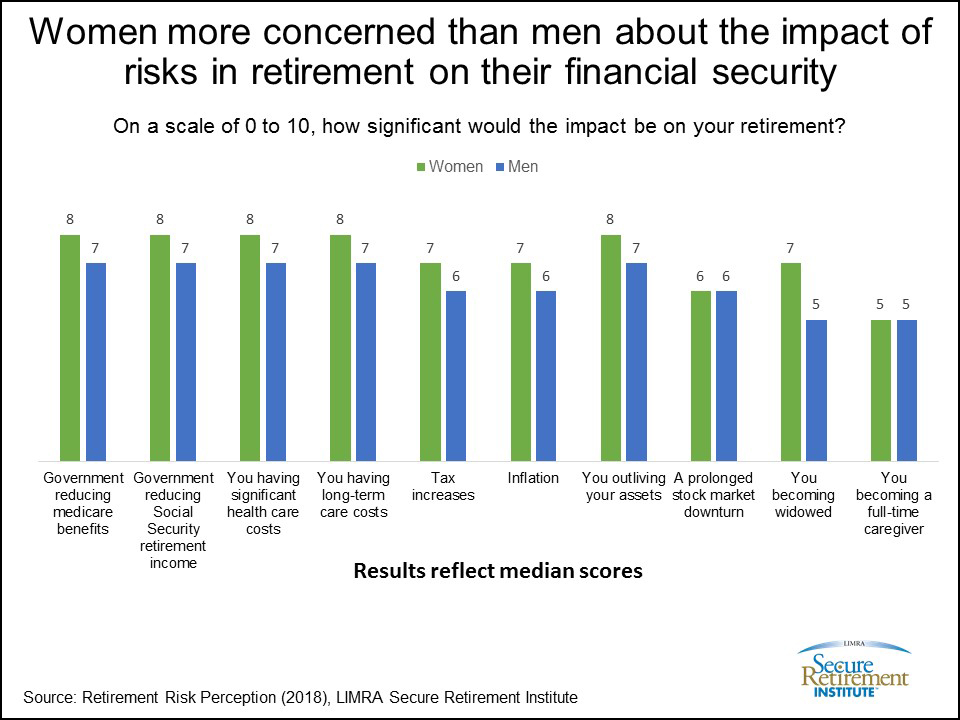 study finds female pre-retirees (age 50 and older, not retired) are more worried than men about the impact of financial risks they may face in retirement  – both in the likelihood and severity of the effect on their retirement security.

The study sought to assess how pre-retirees viewed the potential risks they face in retirement and how these risks would affect their financial security in retirement. When considering how various risks may affect them, individuals have to judge two components of risk: probability and severity.

Retirement is an especially risk-prone life stage. While there are multiple ways to categorize retirement risks, two fundamental risks are environmental and personal.

On average, women felt they were more likely than men to incur long-term care costs and health care costs, face increased taxes and have a reduction to their Social Security and Medicare benefits. They also thought the impact of these risks would be more significant to their financial well-being in retirement.

Interestingly, men and women were equally the least worried about becoming a full-time caregiver to a family member (ranking it a 4 out of 10 in terms of likelihood). Yet research1 shows women are more likely to be caregivers, often times forcing them to curtail their hours at work or retire earlier.

Working with a financial advisor to develop a formal written retirement plan can help mitigate many of the risks retirees face in retirement. Prior Institute research finds two thirds of written plans address inflation and healthcare expense risks, and the majority address risks associated with outliving assets, a prolonged stock market downturn and long-term care expenses.  In addition, half of pre-retirees and retirees who have a formal written plan say they feel very prepared for retirement, compared with just 17 percent of those without one.

The study results were based on an online survey fielded in July and August 2017 to 981 pre-retirees, defined as workers age 50 or older who plan to retire.

LIMRA members can read more about this study by visiting Retirement Risk Perception. Members of the press are encouraged to contact LIMRA Public Relations for more information.