Year after year, Secure Retirement Institute® (SRI®) research has shown that pre-retirees’ and retirees’ top concern is running out of money in retirement. The latest SRI data suggests that retirees who own an annuity are more confident than non-owners that their savings and investments will not run out if they live to age 90. 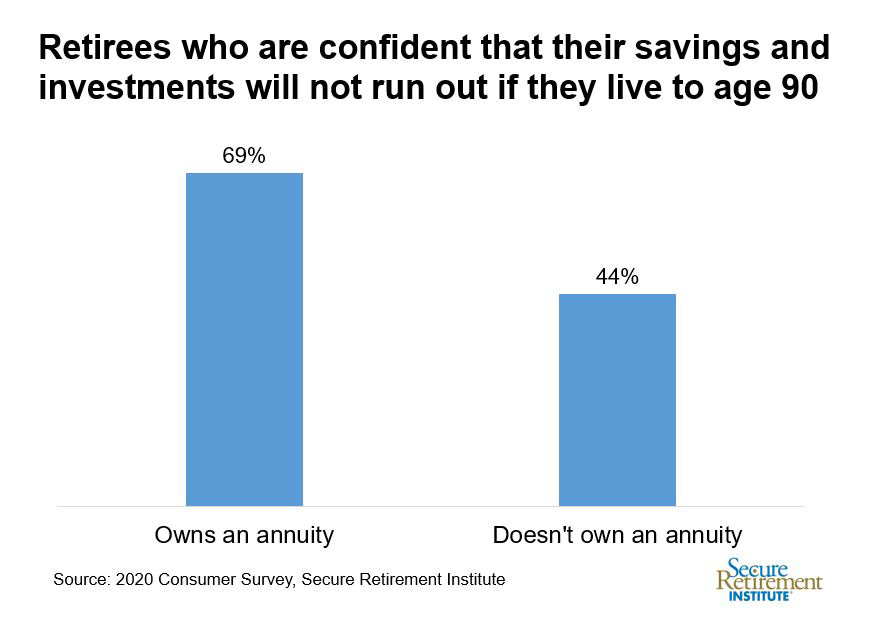 An annuity can create a lifetime income stream, mitigating the potential longevity and market risks consumers may face in retirement. This lifetime income can supplement other sources of retirement income, such as pensions and Social Security, to cover essential and healthcare expenses in retirement, which represent more than half of retirees’ annual expenditures.

SRI research suggests demand for lifetime income will become greater in the coming years. Today, 62% of retirees believe income from Social Security and pensions will cover their basic living expenses but less than half (39%) of non-retirees feel the same. Why? Less than one quarter of non-retirees have a pension and therefore would have to rely on Social Security and income generated from their savings to make ends meet.

Four in 10 (41%) Americans — especially Gen X and Millennials — would be willing to convert some of their assets into a guaranteed lifetime income stream. Securing this guaranteed income stream would ensure they would never face the prospect of running out of money in their retirement.

At a time when we have all experienced so much uncertainty, annuities can offer a sense of security. More than 7 in 10 consumers agree that securing lifetime guaranteed income provides peace of mind but so many Americans lack knowledge about annuities, which undermines their perceptions about the value of annuities. June is Annuity Awareness Month — an opportunity for the industry to educate consumers about the important role an annuity can have in safeguarding their retirement security.