For decades, Americans have saved in workplace and individual retirement accounts (IRAs) on a tax-deferred basis. Workers gain access to their retirement savings when they change jobs or retire. In almost all cases, workers can cash out their accumulated balances immediately, or wait until they reach retirement to cash out.

Every year, defined contribution (DC) plan participants roll over more than $500 billion into IRAs after they retire or change jobs. Secure Retirement Institute® (SRI®) predicts this to exceed $760 billion within the next five years.

SRI research estimates that IRA rollovers represented approximately $565 billion in 2019, and jumped to $623 billion in 2020 as pandemic-related disruption led to an increase in the number of people leaving their employers. Driven largely by the accrual of balances in workplace savings plans, rollovers rank among the largest financial transactions Americans will make.

SRI’s recent Money in Motion: Understanding the Dynamics of the IRA Rollover Market study shows 6 in 10 investors (ages 40 to 75) who recently left an employer decided to roll a DC plan balance to an IRA. The study looked at what drives investors to rollover money (or keep it in their current plan), when they make these decisions, and who helps influence these decisions.

When Investors Decide to Roll
Deciding to roll a balance from a DC plan to an IRA is a complex decision. Both recent retirees and those who voluntarily changed jobs (or were recently laid off) face distinct challenges.

Most investors (54%) decided to roll a retirement plan balance prior to leaving their former job. Further, more than half of those investors, and 32% of all respondents who completed a rollover, decided to so 90 or more days before leaving their job or retiring. 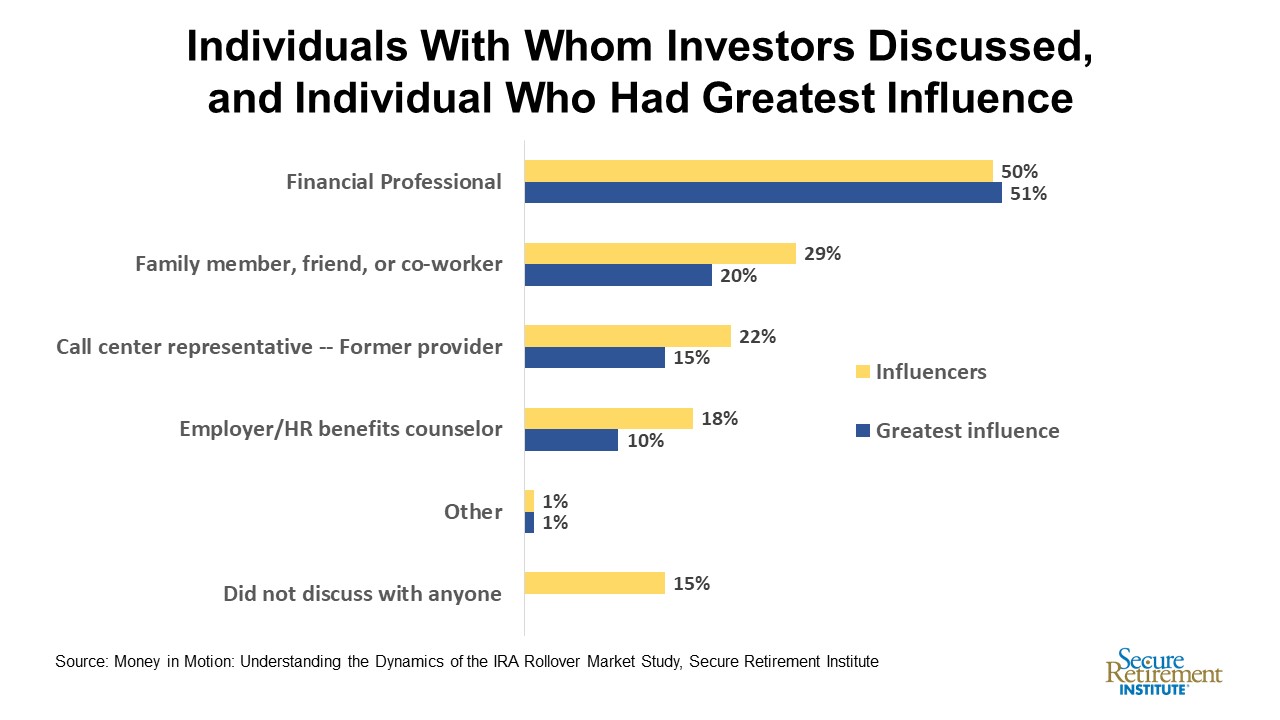 Convenience Drives Investors to Stay
One quarter of investors who left an employer within the past two years left the entire balance in the DC plan. Investors decide to leave their money in the DC plan for a number of reasons.

The top five are:

The study found that compared with those who chose to roll the money, those who kept their money in their former employer’s DC plan are more likely to be younger; be women; have worked at an educational institution, hospital/healthcare organization, or government employer; or have worked at an employer with 5,000 or more employees.

Only 3% of investors who left an employer within the past two years elected to convert their balance into an annuity, possibly reflecting the low availability of this payout option — only 28% of these investors had an annuity payout option.

“Twenty-six percent of investors who left an employer within the past two years took no action with their money, keeping the entire balance in the DC plan. These accounts represent future money in motion, as investors may decide to cash out, roll over, transfer, or begin taking income from the account at any point,” said Drew Maresca, research director, Retirement Research.