WINDSOR, Conn., April 3, 2013 —Retirees who have a positive relationship with their plan provider are more likely to keep their assets with that provider, according to LIMRA’s new report, “Asset Retention: Keys to Success in the Rollover Market – 2012 Results.” 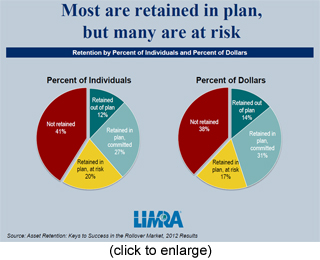 Each year, more than $350 billion becomes available for rollovers as retirees and pre-retiree workers leave their employers. The challenge for plan service providers is to find ways for their company to keep plan participants’ money under their management.

“We found that nearly 40 percent of participants make the decision to stay with their current plan provider, either through a retail or institutional relationship” said Matthew Drinkwater, associate managing director, LIMRA Retirement Research. “It’s important for plan service providers to proactively reach out to participants. Those who have strong relationships and satisfaction levels with their plan provider are more likely to stay with them.” (see chart)

Several factors influence participants who stay with their plan:

On the other hand, just because retirees keep assets in their plan doesn’t mean they’ll stay. Nearly half of retirees and pre-retirees have not yet made an affirmative decision to keep their money in their current plan. Among those who roll over assets with another company, many cite consolidation of assets as the reason. Similar to past LIMRA rollover studies, the “three Cs” of consolidation, control, and convenience are the top reasons for switching plan providers.

With rollovers to IRAs projected to grow to $575 billion in the next three years, Drinkwater noted that it’s certainly worthwhile for providers to pursue. “The study told us that in addition to reaching out to participants, the method of contact matters. An in-person visit or a phone call is more personal than an e-mail or direct mail and works better in building a positive relationship,” said Drinkwater.

Conducted in 2012, the study surveyed 2,131 recent retirees and pre-retirees (aged 55-70) who terminated with their employer in the last three years, were involved in making financial decisions for the household and had at least $10,000 in their defined contribution plan at the time of retirement/termination.

LIMRA, a worldwide research, consulting and professional development organization, is the trusted source of industry knowledge, helping more than 850 insurance and financial services companies in 73 countries increase their marketing and distribution effectiveness. Visit LIMRA at www.limra.com