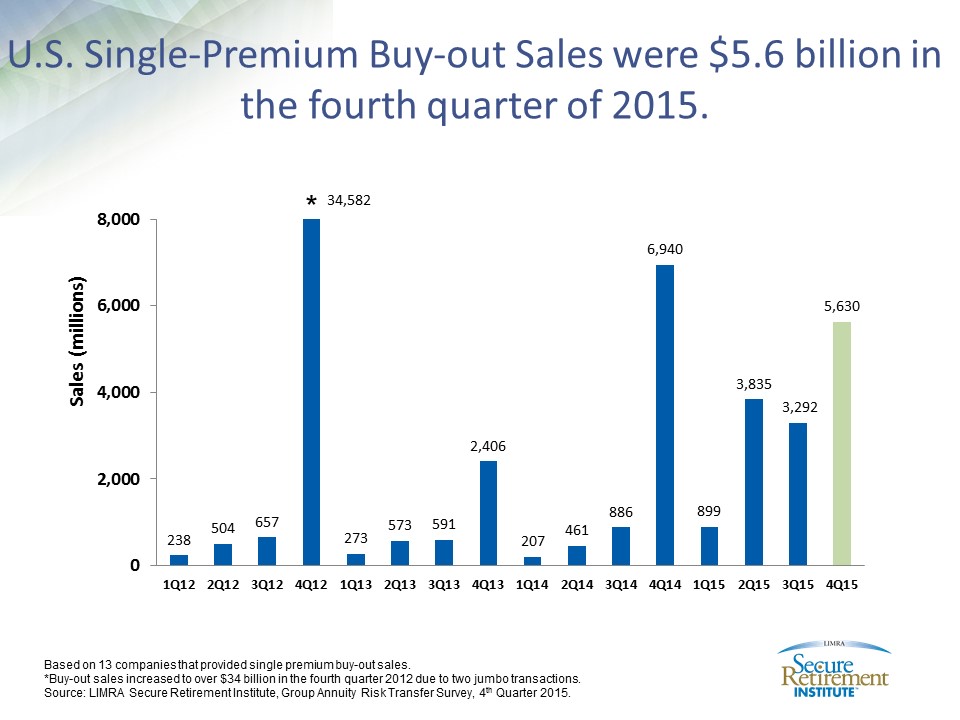 A group annuity risk transfer product allows an employer to transfer all or a portion of its pension liability to an insurer.  In doing so, an employer can remove the liability from its balance sheet and reduce the volatility of the funded status.

In the fourth quarter, group annuity risk transfer sales were $5.8 billion, which is nearly 19 percent lower than the previous year when a jumbo contract (defined as larger than $1 billion) was sold.

“In prior years, significant market growth was a result of one or two jumbo-deals, like the deal between Prudential and General Motors in 2012,” noted Michael Ericson, LIMRA Secure Retirement Institute analyst.  “This year we saw broad growth across the industry and many of the sales came from smaller plans. Companies reported selling more than 300 separate contracts under $100 million.”

In the fourth quarter, single premium buy-out sales were $5.6 billion, which marks the first time sales have exceeded $3 billion for three consecutive quarters.  For the year, buy-out products accounted for more than 95 percent of the total group annuity risk transfer market, totaling $13.6 billion.  This is a 61 percent increase from 2014 levels.  Annual buyout sales have only eclipsed $10 billion one other time (in 2012).

“With PBGC premium increases, market volatility and continued low interest rates, employers are becoming more interested in transferring their pension risk to an insurer, said Ericson.  “The Institute expects this trend to accelerate in the next few years.”

Total assets of buy-out products increased 10 percent, to $90 billion at the end of the fourth quarter 2015.