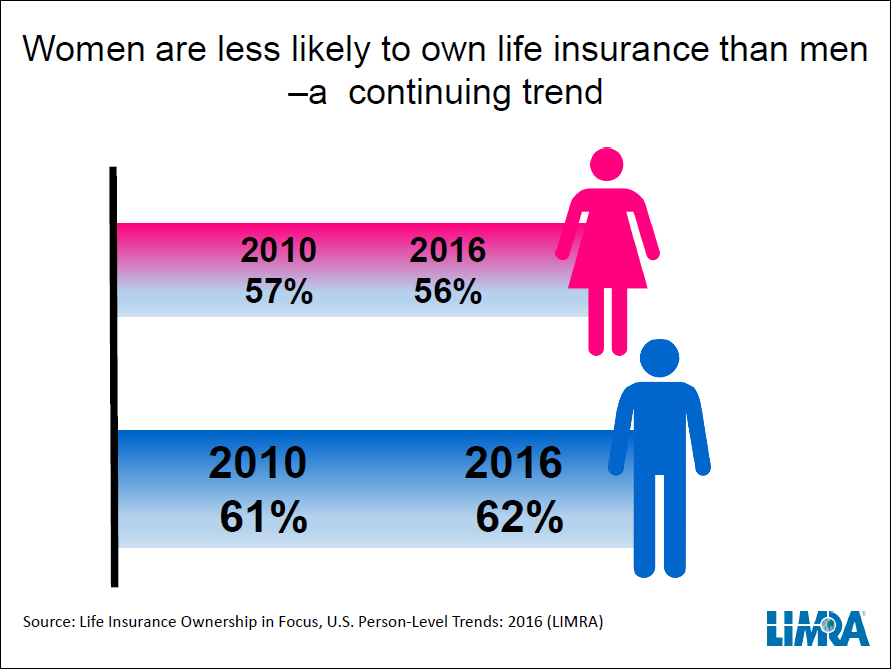 Nov. 16, 2016—A new LIMRA study finds only 56 percent of American women have life insurance coverage. This represents a one percentage point decline from 2010 and remains well below men’s life insurance ownership rate of 62 percent.

“Our research has consistently found that women are less likely to have life insurance coverage than men,” said James Scanlon, research director, LIMRA Insurance Research. “But in today’s economy more American families rely on women’s income and resources to be financially secure. According to Pew Research, 60 percent of today’s households with children under 18 are dual-income compared to just 25 percent in 19601. The fact that fewer women have any coverage at all and often times are well under-insured leaves many American families at risk if they should die prematurely.”

A positive trend the study, Life Insurance Ownership in Focus, U.S. Person-Level Trends: 2016, highlights is the amount of coverage women purchase has increased nearly 21 percent since 2010. Unfortunately, it isn’t enough as they still continue to trail behind men’s coverage ($206,357 – men; $160,782 – women).

One of the top reasons women give for not purchasing the life insurance coverage they need is a lack of affordability. However, financial professionals can dispel this concern. Since prior LIMRA research found people often overestimate the cost of life insurance, financial professionals can conduct a needs analysis and provide a realistic costs estimate.

“Effectively connecting with women and men require different approaches,” noted Scanlon. “While both sexes are positively influenced by the trust they have in their financial professional, prior LIMRA research finds women tend to be more deliberate than men when making the decision to buy life insurance. Women are inclined to put more weight on an advisor’s soft skills than men. A financial professional who takes the time to listen, educate and explain products and how they fit into a buyer’s overall financial strategy will likely be more successful selling to women.”

The 2016 U.S. Ownership study surveyed more than 4,000 American households in the first quarter of 2016. The results are weighted to represent U.S. population.