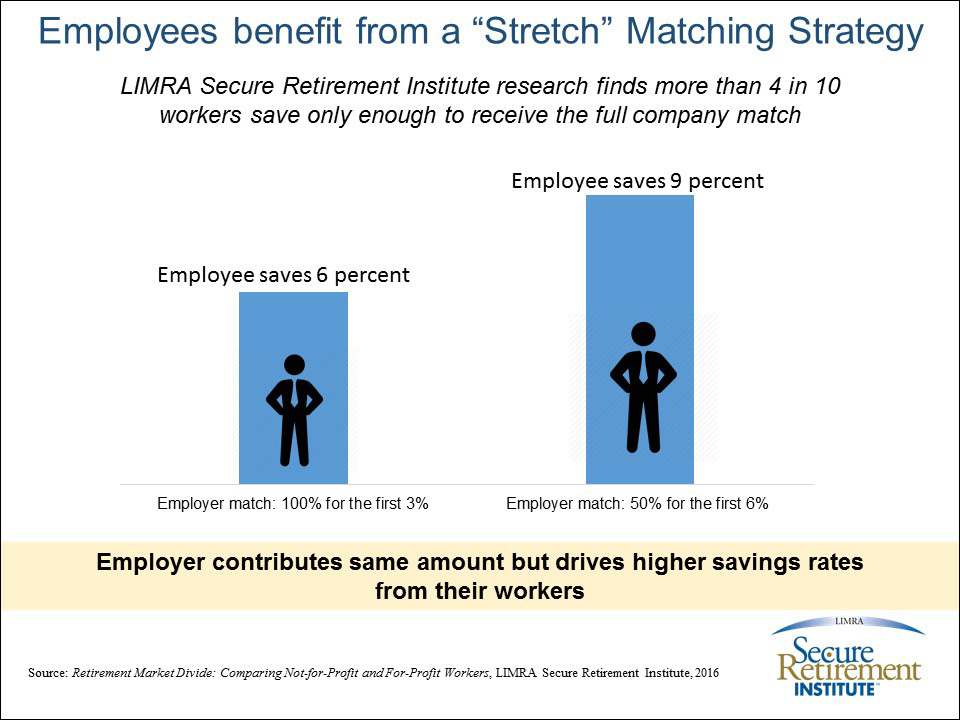 New research from LIMRA Secure Retirement Institute reveals that workers from for-profit and not-for-profit organizations will save only enough in their defined contribution (DC) plan to receive the full company match.

“The study demonstrates the powerful incentive a company match can have on employee behavior,” said Michael Ericson, LIMRA Secure Retirement Institute analyst. “Institute research shows nearly half of American workers believe they are not saving enough for retirement and 4 in 10 working households have less than $25,000 saved for retirement. Plan providers can help employers increase their employee’s savings behavior by recommending a stretch match strategy, which would require an employee to save a higher percentage to attain the full company match.”

The study, which compared workers from not-for-profit and for-profit companies, found only 4 in 10 workers (both NFP and FP) consider themselves “savers.” And of those who have access to a DC plan, 20 percent were not contributing to their employer’s DC plan at all. For profit workers who don’t contribute to their workplace defined contribution plan were more likely to say they cannot afford to do so or they have competing saving priorities, compared with not-for-profit workers (67 percent vs. 53 percent).

Even with robust saving habits, pre-retirees surveyed have no plan on how they will withdraw the assets from their DC plans once they retire—just one third have calculated their savings and expenses in retirement. The study found nearly half of pre-retirees said they plan to withdraw 9 percent or more of their assets each year in retirement. Most financial experts recommend drawing no more than 4 percent a year and in low-interest rate environments, maybe less.

"With longevity at an all-time high, retirement can last more than three decades," said Ericson. "Understanding how to safely draw down savings becomes critically important for retirees. Not-for-profit workers are more likely to have a pension income along with their DC plan, but most for-profit workers will not have one."

Ericson said professional advice can be helpful to both types of workers. The key is to understand the unique challenges and obstacles each group is facing.