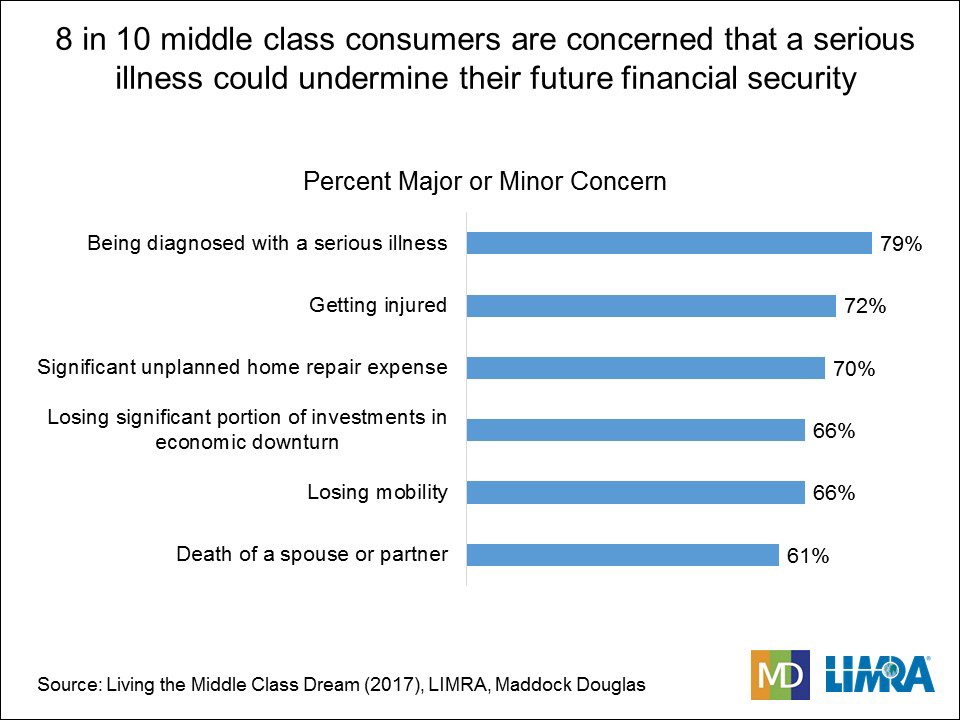 March 22, 2017—A new report, released by LIMRA and Maddock Douglas, shows that the 68 percent of consumers who identify as middle class feel it is getting harder to be able to live a middle class lifestyle.

“Generally speaking, the term middle class is often defined by income or assets.  In this study, we asked consumers to self-identify themselves as working, middle or upper class.  Remarkably, the majority of consumers believe they are in the middle class, including 81 percent of those who would be categorized as upper class (as defined by Pew Research),” said Scott Kallenbach, director LIMRA Strategic Research.  “The study found that 3 in 10 self-identified middle class consumers say they are living paycheck-to-paycheck and fewer than half believe the ‘American Dream’ is alive.”

The study shows that 8 in 10 middle class consumers have concerns of becoming seriously ill and the impact it would have on their future lifestyle.  Seven in ten worry that being injured; incurring an unplanned home expense; or significant financial loss could undermine their future (chart). Three in ten say they are living paycheck-to-paycheck and feel it is impossible for them to save for the future.

What are the aspirations of these self-described middle class Americans?

The biggest goal for the middle class is to be debt free within 10 years, cited by a third of those who currently have debt.  This is particularly true for adults aged 26-34 where 4 in 10 say they want to be debt-free within the next 10 years.  This is not surprising since prior LIMRA research shows that 39 percent of Millennials have student loan debt.

The study’s researchers found that most middle class consumers dream of having a comfortable, fulfilling lifestyle in the future.  Other goals that they think would help them achieve this (and they aren’t already doing) are taking vacations (20 percent), owning a home (14 percent) and living a healthy lifestyle (14 percent).

Where does retirement fit?

For many who identify as middle class, what was traditionally defined as retirement seems unattainable.  Thirty percent of those surveyed said they don’t expect to retire and more than half (52 percent) say they plan to work for pay in retirement.

“Our study also discovered that more than 65 percent feel they do not have a lot of options regarding their career path choices.  More than 8 in 10 say they could not pursue other career interests without experiencing considerable financial worry,” said Maria Ferrante-Schepis, executive vice president and managing principal, Insurance & Financial Services Innovation, Maddock Douglas.  “The study suggests that the industry needs to expand the definition of retirement, and help people identify new and different options to sustain their lifestyles as they get older.”

Is there an advice gap?

The most common types of advisors that middle class consumers use are financial advisor/planner (26 percent), an advisor from a bank (12 percent) and an insurance agent/broker (11 percent).  Yet one third of consumers who work with at least one financial professional feel that their advisor is not meeting all of their needs.

How can advisors and financial companies help?

Budget management is the most common step that middle class consumers feel they need to take, cited by 65 percent.  Consumers also mentioned saving for retirement (47 percent) and building an emergency fund (39 percent) as financial goals.  If companies and advisors develop products and services that help middle class consumers achieve these goals, they are likely to position themselves to sell more of their core offerings like life insurance, annuities and IRAs.

“Our findings underscore the need for the financial services industry to do more to connect with middle class consumers,” said Kallenbach. “Taking the time to understand and address all of their concerns, ambitions and goals - even those not traditionally related to financial services – will go a long way to building trust and lead to productive relationship for both parties.”

The study examined more than 2,500 consumers in the United States and Canada, ages 26-75 years old who identified themselves as ‘middle class’ and were the decision-makers in the household.  The results were weighted to represent the general population.

LIMRA, a worldwide research, consulting and professional development organization, is the trusted source of industry knowledge, helping more than 850 insurance and financial services companies in 64 countries. Visit LIMRA at www.limra.com.