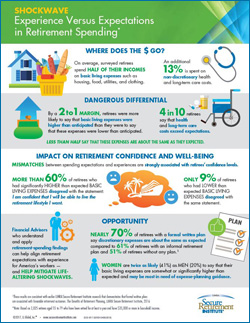 A new study by LIMRA Secure Retirement Institute finds 26 percent of retirees said their basic living expenses in retirement were higher than they expected prior to retiring.  Another 4 in 10 of retirees underestimated health care and long-term care costs.  On average, two-thirds of retirees’ expenditures are spent on basic living expenses and health care and long-term care costs.

The study found women are 50 percent more likely than men to say that their basic living expenses are somewhat or significantly higher than they expected before they retired. (30 percent versus 20 percent, respectively).  Women are also slightly more likely to experience higher than expected health and long-term care-related expenses than men are (43 percent vs. 39 percent).  Among retirees who faced unexpectedly higher basic living costs, women express lower levels of confidence that their savings and investments won’t run out if they live to be 90 (36 percent of women vs. 49 percent of men).

Not surprisingly, lower-income retirees are substantially more likely than higher-income retirees to say that their basic living expenses are higher than anticipated. Among retirees with incomes between $35,000 and $49,999, 35 percent say these expenses exceeded their expectations prior to retirement.  When you consider that retirees with household incomes of $35,000 to $49,999 spend almost 60 percent of their income on basic living expenses, the added unexpected costs could substantially affect their retirement confidence.  Retirees with incomes of $100,000 or more spend about 45 per­cent of their income on basic living expenses, and only 15 percent claim that expenses are higher than they thought they would be.

“Many retirees say they would cut back on discretionary expenses to compensate for larger than expected basic living expenses and/or health and long-term care costs,” noted Drinkwater.  “This is not necessarily a practical solution. Generally speaking, our study found discretionary spending represents less than 20 percent of total expenses for retirees. And those facing these unexpected higher expenses already spend very little on discretionary items.”

How can consumers avoid miscalculating their expected expenses in retirement?

To view an infographic highlighting the findings, please visit: Experience Versus Expectations in Retirement Spending.

LIMRA Secure Retirement Institute conducted this survey in early 2017. More than 2,000 U.S. consumers ages 50-79 who a) retired at least one year earlier, b) were involved in the household’s financial decisions, and c) had annual household incomes of at least $35,000 participated. The results were weighted to demographic characteristics to ensure the results represented the U.S. population.