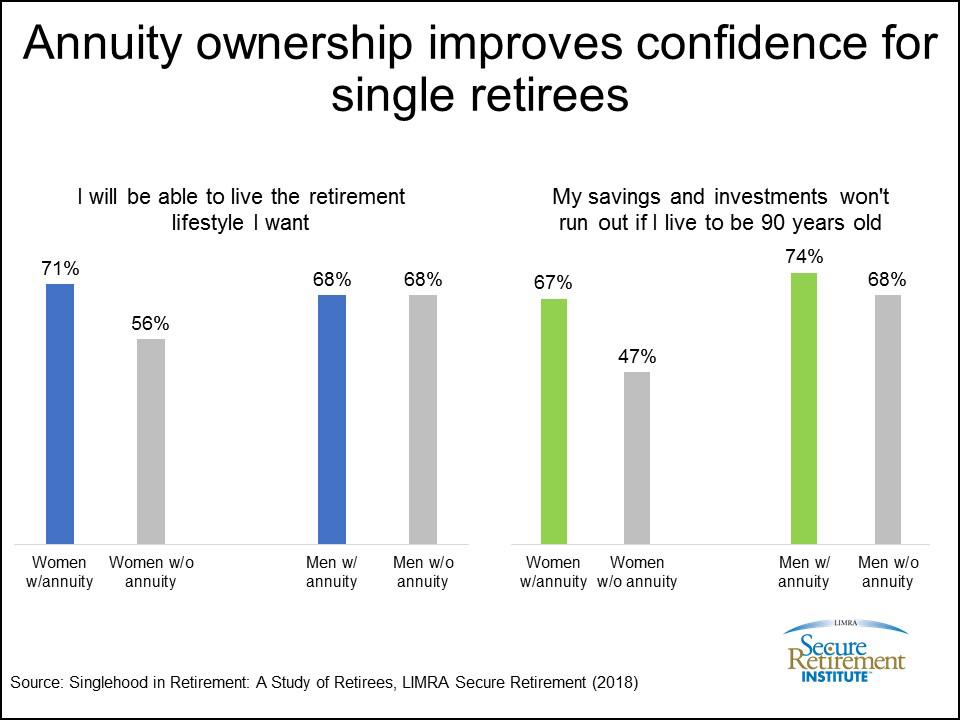 – New LIMRA Secure Retirement Institute (LIMRA SRI) research finds single retirees - particularly single women retirees - feel less secure about their financial security in retirement and are more concerned about outliving their savings than those who are married or have partners.

The study finds only 64 percent of single retirees feel confident they will be able to live the lifestyle they want in retirement, compared with 71 percent of married retirees. Four in ten single retirees believe their savings won’t be enough if they live to age 90 – close to half of single women are not confident their savings will last through age 90.

“We have long known that longevity risk is greater for women. Because essential living expenses are proportionally higher for single-person households than couples’ expenses, the risk of running out of money is greater for all single people as they age,” noted Jafor Iqbal, assistant vice president, LIMRA Secure Retirement Institute. “Today, there are 47.5 million single Americans who are age 65 or older – a third of them live alone and are solely responsible for their own retirement security.”

One in three women retirees report their basic retirement expenses are higher than expected, compared to only 1 in 5 men. Single women typically spend a higher percentage of their income on basic and health care costs in retirement (68 percent vs. 62 percent) and spend less on discretionary activities than do single men (15 percent vs. 20 percent). Working with an advisor to develop a formal retirement plan could help single women have a more realistic picture of their expenses in retirement.

Annuity Ownership and Working with an Advisor Drives Confidence

LIMRA SRI surveyed 1,130 single-men-and-women retiree households, aged 55 to 79; who had been retired for at least one year and had household incomes of at least $35,000.