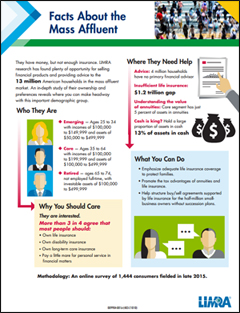 research on mass affluent consumers found more than 75 percent agree that most people should own life insurance, yet nearly 4 million of the 13 million total mass affluent households do not have adequate coverage.

LIMRA studied the mass affluent market as three different age groups with investible assets ranging from $50,000 to $499,999.  While they have been able to accumulate assets, their life insurance gap is estimated at $1.2 trillion.  They also understand the importance of having coverage as more than a third of mass affluent households say they would be in financial hardship within several months if the primary wage earner died.

The research also found that 4 million mass affluent households have no primary financial advisor, creating a huge opportunity for companies and advisors. Highlights of the research are in the LIMRA infographic “Facts About the Mass Affluent.”

Mass affluents are similar to many consumers who understand the need for life insurance but don’t have enough coverage. One reason may be because they are “stuck.”

In support of September’s Life Insurance Awareness Month, LIMRA has prepared the fact sheet “5 Proven Ways to Reach Stuck Consumers” for companies and advisors to help Americans get the coverage they need.