WINDSOR, Conn., Dec. 12, 2012 — Only 48 percent of U.S. pre-retirees (non-retired aged 55-70) believe they will be able to live the lifestyle they wish in retirement, according to LIMRA's recent study, The Pre-Retiree Market: Surveying the Landscape. (See chart here.) 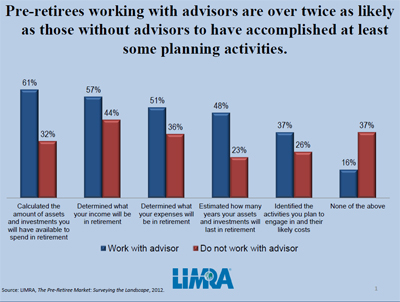 "Pre-retirees are feeling insecure about their retirement future, in part because they have not yet taken the steps to plan for retirement," said Matthew Drinkwater, LIMRA associate managing director of Retirement Research. "Our research indicates that retirement preparedness is strongly linked to the completion of key retirement planning activities like determining your income and expenses, calculating your assets and how long they will last, and identifying the things you want to do in retirement and how much they will cost."

LIMRA research has consistently shown that working with an advisor can help organize retirement planning efforts. This study found those who worked with advisors were twice as likely to have accomplished at least some planning activities, particularly the more complex aspects of planning, such as calculating future assets available in retirement and estimating how long those assets will last (chart).

"Retirement, for some, will make up almost a third of their lifetime," noted Drinkwater. "Clearly, our research shows that working with an advisor to plan for this major stage in life is not only wise but has measurable positive results on retirement planning."

Formal, written plans that manage income, assets and expenses during retirement can be an effective way for advisors to help their clients to organize their planning efforts and implement the specific elements of the strategies they establish. However, such plans are not common: Only 15 percent of all pre-retirees have a formal written retirement plan. Even among pre-retiree households with higher household incomes, just about half have such plans in place. Meanwhile, 62 percent of pre-retirees working with an advisor have written retirement plans.

When asked to identify which services offered by advisors are most valuable, pre-retirees' responses mirrored those of advisors surveyed by LIMRA earlier this year. Both advisors and pre-retirees agree that creating an income plan and minimizing the risk of running out of money are critically important.

These results also align with findings from LIMRA's study of recent deferred annuity buyers. According to the 2012 study, the majority of recent deferred annuity buyers said the two most important reasons they bought an annuity were to facilitate retirement planning and to ensure their assets lasted throughout their and their spouses' retirements.

"The challenge for the retirement industry is to convince more pre-retirees that sound planning truly can boost the likelihood that they will live the lifestyles they have imagined. Some of these activities can be difficult, but they are essential — and help is available." said Drinkwater.

LIMRA is a worldwide research, consulting and professional development organization that helps more than 850 insurance and financial services companies in 73 countries increase their marketing and distribution effectiveness. Visit LIMRA at www.limra.com.