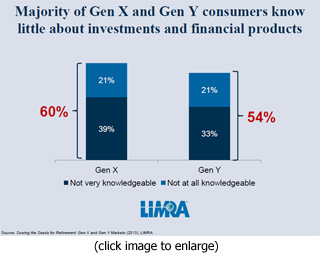 WINDSOR, Conn., Feb. 14, 2013 — More than half of Gen X and Gen Y consumers admit having little or no knowledge about investments and financial products, according to a recent LIMRA study (see chart).

LIMRA’s research discovered that among Gen X and Gen Y consumers with access to a defined contribution (DC) plan through their employer, those who have never made contributions are more likely to feel less knowledgeable about investments and financial products than those currently contributing to their DC plan. This finding suggests that if financial literacy could be improved for these consumers, the likelihood of participating in their employers’ DC plans may rise.

The study also found that the market opportunity for Gen X and Gen Y households is growing. Based on analysis of the Federal Reserve Board’s 2010 Survey of Consumer Finances, of the nearly $3 trillion in Gen X household financial assets, 43 percent is invested in retirement and pension accounts. Among retirement and pension accounts, two thirds of assets are held in DC savings plans and 30 percent are in IRAs.

On average, Gen X consumers have contributed to their current employer’s DC plan for nine years, accumulating nearly $70,000. The median deferral rate is six percent for all Gen X consumers, but slightly higher for men (seven percent). Given that Gen X consumers are over age 30, their deferral rates are typically recommended to be above 10 percent. However, less than half (43 percent) are contributing eight percent or more.

“There’s a lot of attention on the Baby Boomers (78 million) but there are nearly 116 million Americans aged 20 to 47, and as an industry we need to help these Americans plan and save for retirement,” said Shiner. “Most Gen X and Y Americans will have to rely solely on their savings to fund their retirement, yet few are taking full advantage of the retirement savings vehicles available to them. The decisions these consumers make today will have a lasting impact on their ability to be financially secure in their retirement years.”

The study is based on a survey conducted in May 2012 that polled 5,296 Americans aged 20 to 84. Of the people surveyed, 884 respondents were Gen X and 720 were Gen Y. Additional results were based on LIMRA analysis of the U.S. Census Bureau’s Current Population Survey March 2012 Supplement and the Federal Reserve Board’s 2010 Survey of Consumer Finances.

LIMRA, a worldwide research, consulting and professional development organization, is the trusted source of industry knowledge, helping more than 850 insurance and financial services companies in 73 countries increase their marketing and distribution effectiveness. Visit LIMRA at www.limra.com.