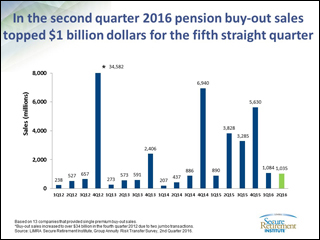 “Pension buy-out activity for the first six months of this year is higher than it has been in the last five years,” said Michael Ericson, analyst for LIMRA Secure Retirement Institute.  “More companies of all sizes are looking to transfer their pension risk which has increased sales activity in the first half of the year.”

Traditionally, buy-out sales have had a strong seasonality with most sales occurring in the fourth quarter.  Activity in the first six months of 2016 is up 22 percent compared with the first half of 2015.  Through the second quarter of this year, 131 plan sponsors have converted their defined benefit (DB) pension plans to group annuity contracts, surpassing the previous high-water mark of 107 contracts sold in the first six months of 2015.

The second quarter results of $1.03 billion are less than the $3.8 billion in sales for second quarter 2015 primarily because of one “jumbo” deal.  Last year Kimberly-Clarke transferred its pension into group annuity contracts with two insurance companies. These “jumbo” deals can have a significant impact on sales for the quarter.

Several years of low interest rates and a volatile market have made it difficult for plan sponsors to keep their DB plans properly funded.  In addition, the Pension Benefit Guarantee Corporation (PBGC) has significantly increased its premiums and changed to new mortality tables which are less favorable to plan sponsors.

“All of these factors have made DB plans more expensive and burdensome,” said Ericson. “That’s why an increasing number of companies are transferring their pension risk to an insurer by purchasing a group annuity.”

A breakout of group pension buy-out sales by quarter since 2012 is available in the LIMRA Fact Tank.