With thousands of financial representatives housed in hundreds of offices across the United States, this large financial services company relies on its reps to build and help serve its client base. Recognizing the importance of choosing the right people for this challenging, entrepreneurial job, they rely on LIMRA's Career Profile+ to help them recruit candidates who will be productive and profitable for the company's retail sales operation.

After seeing how the Career Profile+ could improve short-term results, this company was interested in knowing whether it had an impact on their long-term retention and profitability goals. They found that it did: High scorers, in addition to setting themselves apart immediately, continued to outlast and outperform low scorers through their first five years of the sales career.

After one year, high scorers had a 63 percent higher survival rate and earned 44 percent more in sales commissions than low scorers: 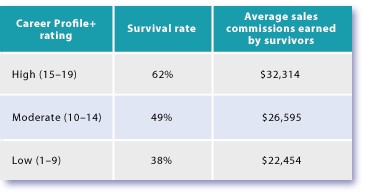 And after five years, high scorers had a 200 percent higher survival rate and earned 75 percent more in sales commissions than low scorers: 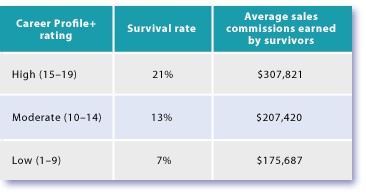