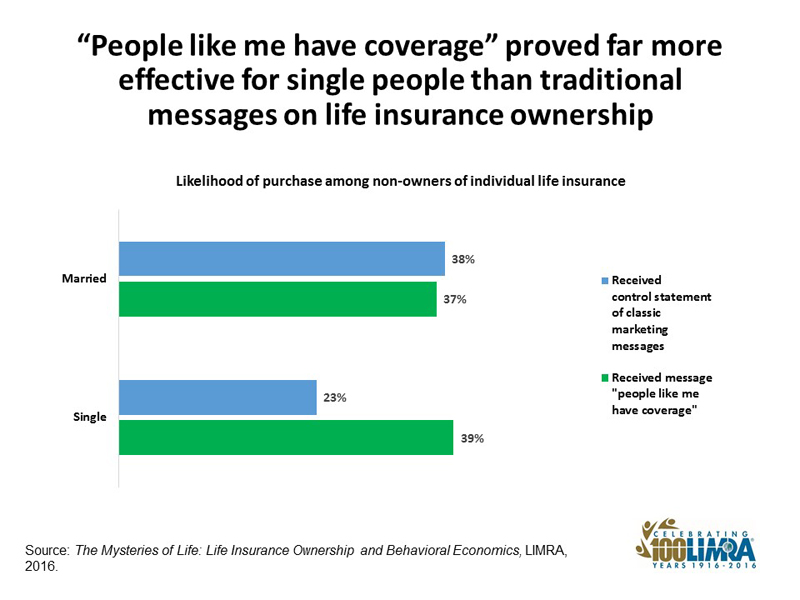 A new LIMRA study using behavioral economics finds consumers are more likely to buy life insurance when people similar to themselves own coverage. In the study consumers were given eight messages that challenged their biases toward life insurance ownership with one stating "most Americans do own life insurance, including people like you."

"This was the most successful message we tested," said Jennifer Douglas, associate research director, Developmental and Strategic Research at LIMRA.  "Attitudes about life insurance improved for all demographic groups in some way when having coverage is perceived as a social norm."

The study measured responses to all the test messages against a control statement of classic marketing messages on the importance of owning life insurance (replacing lost income, covering final expenses, paying for children’s education, etc.)

One noteworthy finding occurred when comparing the responses of married and single consumers. Married people appear just as “likely to buy” life insurance after reading the social norming message as the control statement (37 percent vs. 38 percent). On the other hand, only 23 percent of single people are “likely to buy” after reading the control statement but researchers saw a jump to 39 percent when singles received the social norming message.

“Single people and those without children are traditionally a tough sell for life insurance,” said Douglas.  “This finding suggests that a tailored message on social norming can be effective, particularly with groups the industry has struggled to reach.”

LIMRA chose a behavioral economic approach for the study to learn more about what motivates decisions on a subconscious level and compare them with consumers’ objective responses.

“We don’t want to believe that other’s behavior influences us, but it certainly does; and we’re often better off for it,” Douglas noted.

At the other end of the spectrum, a statement that emphasized how "quick and easy" it can be to purchase life insurance was the least effective message in the study both on a conscious and subconscious level.

"Making the purchasing process simpler is an important goal, but convenience alone is not likely to motivate uninterested consumers to shop for coverage," said Douglas.

LIMRA researchers collected nearly 4,000 responses from consumers age 30 -50 through online surveys and conducted the study in two phases to compile the final report.

For 100 years, LIMRA, a worldwide research and development trade association, has been the trusted source of industry knowledge, helping more than 850 insurance and financial services companies in 64 countries. Visit LIMRA at www.limra.com.